Russian girls Yana , Karolina and Marina take part in this video . This time the girls decided to arrange a very dirty lesbian show, in which Yana first drinks milk herself and then offers to drink milk to her friends Marina and Caroline . After that, Yana pours milk on the naked bodies of Marina and Caroline . Streams of milk flow down the naked bodies of the girls, but this is not enough for the girls, Yana puts cancer on Caroline’s knees and pours milk on Caroline’s ass, then takes a rubber penis in her hands and inserts it into Caroline’s ass and fucks Caroline in the ass . At the same time, regularly watering Caroline’s ass with milk . After Yana, Marina joined the action , Marina walked around the cancer-prone Karolina and then sat down next to her . After sitting next to Karolina for a while , Marina got up and turned her ass to Karolina and began to poop on her friend’s ass . Now Karolina’s ass is not only in the milk but also in Marina’s shit, Yana again pours milk from the bottle on Karolina’s ass and Marina’s shit . Yana really likes what is happening now , all the girls Yana Marina and Karolina are very excited, Yana will not stop and will continue to fuck Karolina with a rubber member in the point . After playing a little with Karolina’s ass, Yana passes the rubber dick into Marina’s hands and now Marina fucks Karolina in the ass with a rubber dick . Yana gets up and pisses on Caroline’s ass , a large amount of urine releases Yana on Caroline . Caroline’s ass is now dripping with milk, urine, and everything brown, the color of shit . But that’s not all, Yana asks Marina to also get cancer on her knees like Karolina, Marina obediently does what Yana tells her and Yana takes a second rubber member in her hands and inserts it first into Marina’s pussy, and then into the point . Yana also pours Marina’s ass with milk , having fucked Marina a little in the ass, Yana gets up turns to Marina with her ass and poops on Marina’s ass . Yes, Yana likes to relieve herself on the naked bodies of her friends . Having relaxed on Marina’s ass, Yana again continues to fuck Marina in the ass, while watering Marina’s ass and her shit with milk . Marina is cancer on her knees and she likes it , but then Yana calls Karolina and asks Karolina to piss on her friend Marina, Karolina gladly fulfills the request of her friend Yana , and pisses on the naked Marina who is cancer on her knees . Trickles of urine , milk, and shit run down Marina’s body . All the girls except Yana were humiliated and used as a toilet, despite the fact that Marina and Karolina Yana used as their own toilet, the girls got a huge pleasure from what was happening .
File name:Dirty lesbian show milk piss and shit – ModelNatalya94 – Groups, Pee, Poop Videos.mp4
File Size: 816 MB
Resolution: 1920 x 1080
Duration: 00:13:24
Video: MPEG-4 Visual, 1920x, 29.970 FPS, 8316 kb/s
Audio: AAC LC 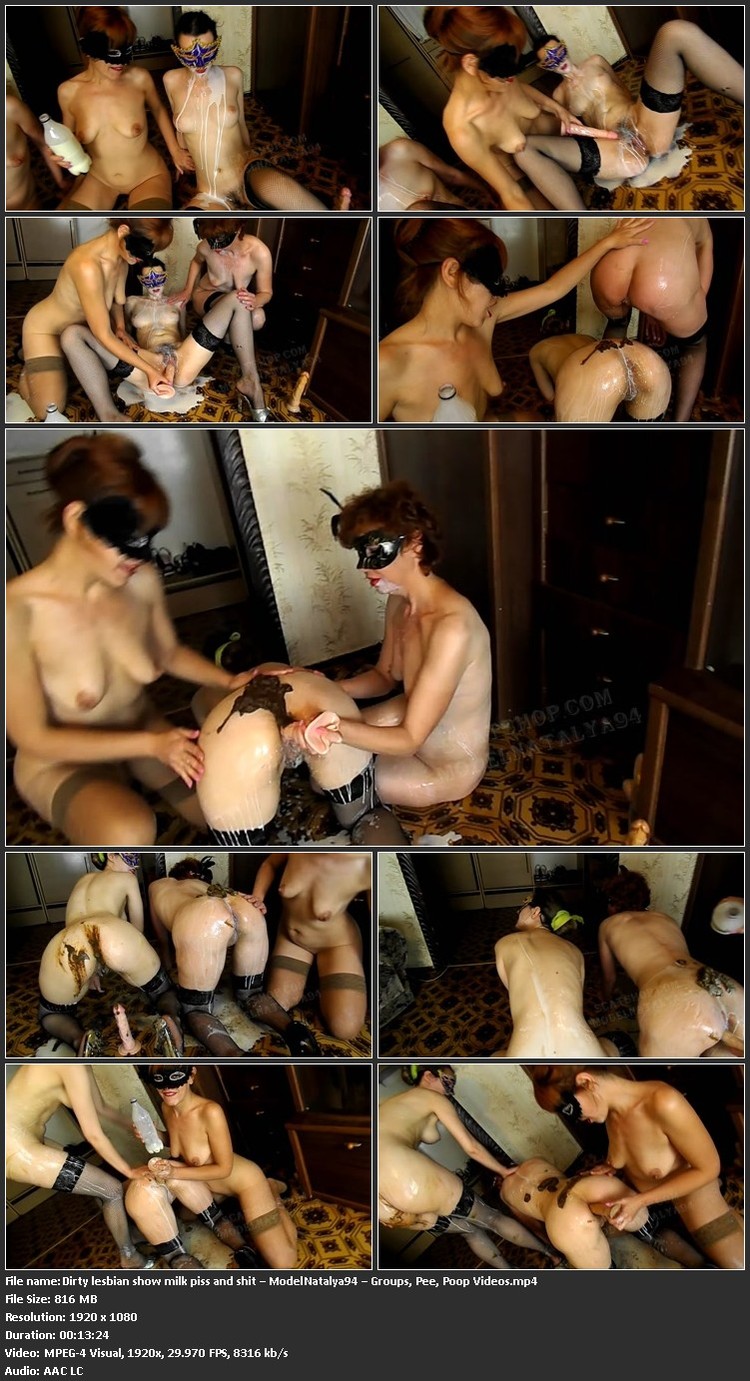