Hello everyone anddddd welcome back to the greatest scat show on earth! hehe We have an incredible movie here on tap, and I just finished it, so while it’s fresh on my mind I am going to give you the low low down ?? This movie totally blew me away! There is a scene which I feel is the pinnacle of the movie where Imani has her deepest darkest fantasy fulfilled, and boyyyyy does it not disappoint! Mr Cheeks told me he felt as if he were filming fetish history as the scene happened! He said and I quote from a text message “It would be hard to film a better scat scene then Imani had, the swallowing of vomit and scat was epic. Scat is more then just getting it in your mouth and playing with it, the home run scenes are the swallows”; and in my opinion he’s right right lol This was some hardcore stuff geeeesh! So to give you an idea of what was happening here and some context, the scene opens up with the girls having a fetish party and playing a game of truth or dare. The scene features Raquel, Angela and Imani. They were having a lot of fun together and I was totally enjoying the stories and overall vibe of the movie! A dare had Angela pee into a cup and Imani drink it all, and another dare had Angela licking Raquel’s feet and pretty toes! But the movie takes a turn for the extreme when Imani reveals her darkest fantasy! She admits she wanted two girls to shit into her mouth while she used a vibrator and had an orgasm, but she wanted to actually try to swallow both loads!! (And she almost did swallow it all, it was incredibly impressive and had my white panties soaked all the way through! I will be totally honest, this scene with her eating drove me to an almost instant orgasm and I selfishly had about three more hehe) But little did she know they were going to make that fantasy a reality! Angela was the first to drop her load into Imani’s mouth. Now it got intense super fast. Because as she was swallowing it, she would vomit it right back up into her own mouth, then she would swallow the vomit mixed with scat, and then she would puke again all into her own mouth being careful not to lose any of it everrrrrrrr! Her mouth was like a constant over flowing toilet bowl full of vomit and scat that was constantly being swallowed and replenished! It was soooo intense watching her in such pleasure! She was orgasming so hard and gushing almost non stop like a faucet, her pussy was squirting like an explosion; as she continued to swallow her scat cocktail! I could watch that Imani scene over and over again. And just when you think it can’t get any better Raquel drops her load into her mouth as well, and the never ending pleasure gasm continues! Both Angela and Raquel both were there kissing her and pleasuring her throughout the entire scene. But you know Imani would return the favor ?? She actually was able to shit into both of there mouths at the same time as they kissed with it and swapped it. You could tell though they were having a much harder time with the scat then Imani was, who aced every swallow and second of this movie. Although Angela was able to grab the vibrator and have a scat induced orgasm as well, she still struggled with the smell and gagging! This was just an absolutely incredible movie and I can promise you this is one that you do NOT want to miss lol It is an absolute nut drainer ?? There is nothing look a good female scat orgy, with a historic scat performance for the ages by Imani! Enjoy ??
File name:Girls Only Scat Party (Truth Or Dare Leads To Imani’s Fantasy).mp4
File Size: 343 MB
Resolution: 1280 x 720
Duration: 00:17:28
Video: AVC, 1280x, 30.000 FPS, 2491 kb/s
Audio: AAC LC 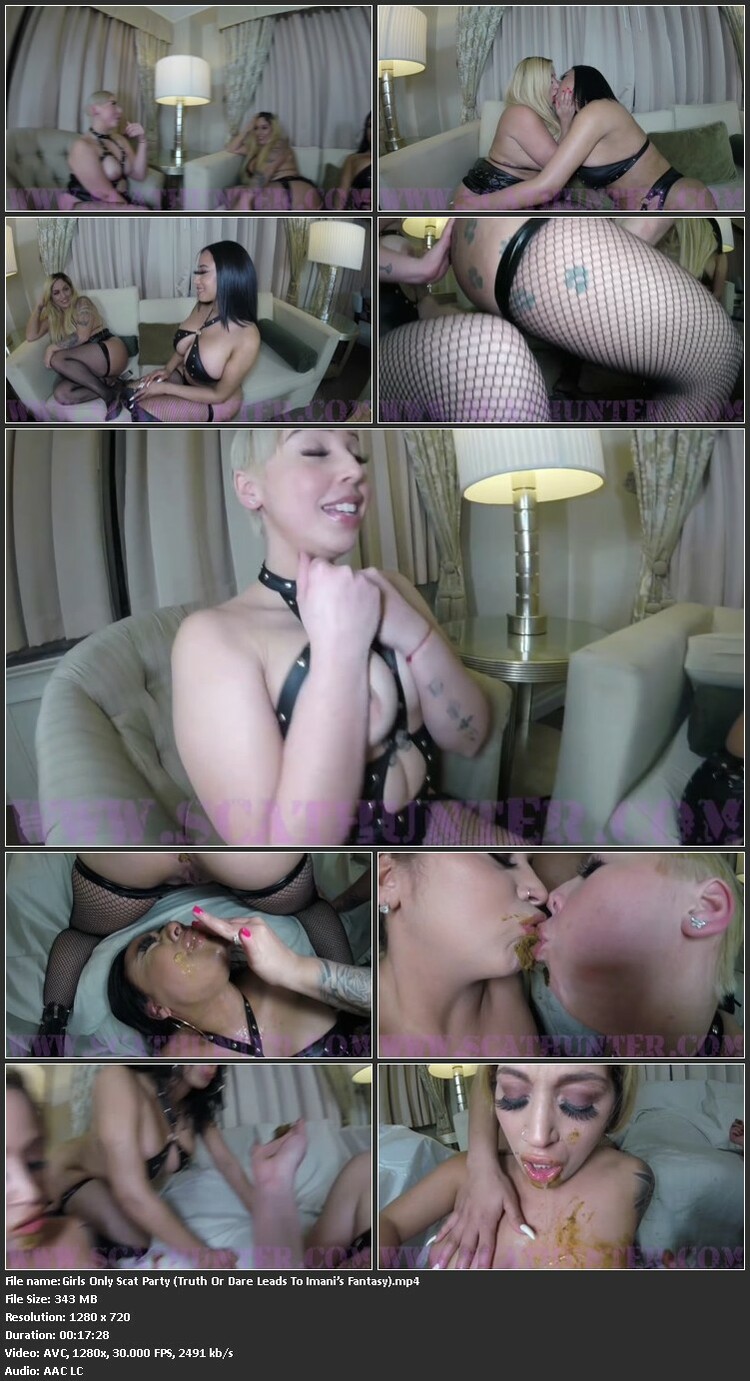