CategoryPissing The most popular scat videos

Hello Scat enthusiasts and welcome once again…After some local covid restrictions were lifted thankfully we were finally able to get back to business and do what we do best!!! Hopefully we don’t ever leave you hanging this long again! 🙂 This film showcases and welcomes back the beautiful and dominant Mia, along with the sexy big booty scat queen, Imani! The scene opens up with Mia her tutor (or in this film her tooter 😉 she filled her mouth with a ton of cute smelly farts hehe) trying to get Imani to pay attention who can’t seem stay out of her phone. Mia is not having any of this and quickly decides to change the lesson and teach her about scat instead of algebra. (I want to make it clear that I absolutely love Mia in this role and that she had me incredibly wet and horny the entire time, her assertion of dominance had me wishing she was in my bedroom with me tying me up instead) She starts off by inspecting and spanking Imani’s big round ass and giving her some spit therapy, which, Imani passes with flying colors swallowing it all! She then decides she wants her pretty little pussy and asshole sucked on and pleasured, following it up with a free flowing fountain of warm piss that Imani immediately laps up and slurps down. Now I am going to admit I think I am developing a pee fetish lol I have been getting so turned on lately at the prospect of another beautiful woman peeing in my mouth. This film was no different, and my hand slipped into in my shorts and was instantly met with a super wet almost aching pussy. I reached over and grabbed my wand at this point 😉 The next lesson Mia called out of her playbook, was to have Imani shit into a dog bowl, which read “Chow Down” on it. I couldn’t help but think to myself If the makers only knew what this bowl was being used for LOLZ! So after Imani pushes out a sizable turd, Mia begins forcing Imani’s face into the bowl and tells her to eat it! Suddenly Imani emerges from the bowl with a huge piece of her own shit in her mouth and swallows the entire thing…followed almost immediately by Mia vomiting directly into her mouth ( This scene actually shocked me lol I was not sure how I felt about it at first because I have never seen anything like it! But its kinda hot hehe) I also think Mia was having a hard time NOT throwing up at this point lolz! She then commanded Imani to finish what was in the bowl. Imani swallows the rest of it, with more of a vomiting Mia hovering over her face, dumping loads of puke and spit into her mouth, which Imani is literally SWALLOWING! So she swallowed her entire own load of shit, licked the bowl clean, and chased it all down with some of Mia’s vomit. This was no doubt an INTENSE scene. It finishes with Mia forcing her boot into Imani’s mouth while she has a moaning pleasurable orgasm covered in vomit, with a stomach full of her own shit. Mia then notices a pile of vomit on the floor, feeds it to Imani who swallows it all. I enjoyed this movie sooooo much, I loved the presentation and the dominance of beautiful Mia, anddddd I orgasmed (is that even a word? hehe) at a super high level 🙂 new fav 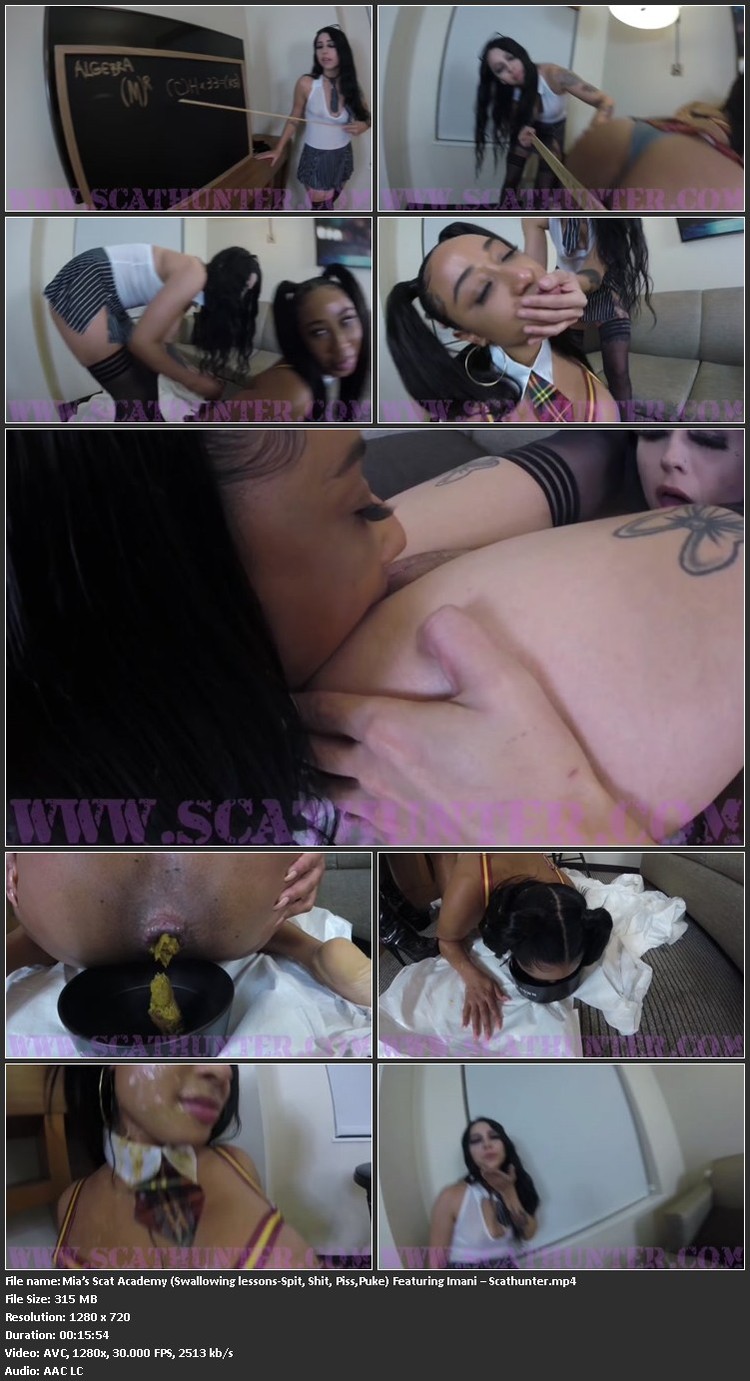